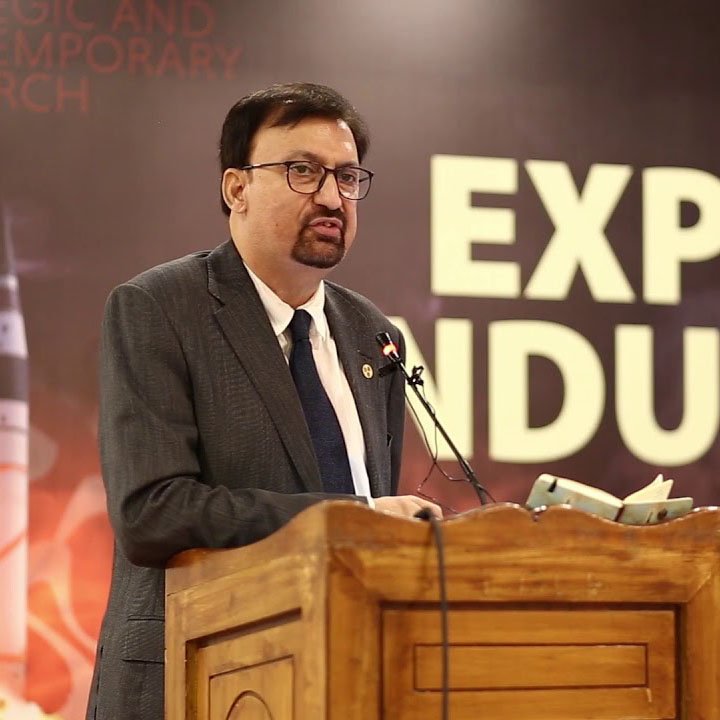 Air Commodore Khalid Banuri was appointed as Director Arms Control & Disarmament Affairs (ACDA) at the Strategic Plans Division (SPD) in November 2005. His earlier association with the SPD as Deputy Director and later, as Additional Director has been from the year of organization’s inception, since August 2000. Air Commodore Banuri is a fighter pilot by raining. Having served in the Pakistan Air Force (PAF) since 1979, he has flown a variety of fighter aeroplanes and holds significant field, flight instruction, command and staff experience. He is a graduate of the F- 16 squadron of the Combat Commanders’ School, Flying Instructors’ School as well as the PAF’s Air War College and UK’s Joint Services Command & Staff College. He is decorated with Sitara-e-Imtiaz (Star of Distinction) for his outstanding commitment and devotion towards the service.
Air Commodore Banuri holds an MSc in Defence & Strategic Studies (DSS) from Quaid-e-Azam University (QAU) Islamabad and an MA in Defence Studies from Kings College London. He is a former fellow of The Henry L. Stimson Center Washington DC and has participated in a number of international conferences and seminars in Russia, USA and the
UK. He has been part of national delegations for various bilateral talks with countries of Pakistan’s strategic interest. He has occasionally spoken at some foreign universities and is a
regular lecturer at military and civilian institutions in Pakistan.
Having served as Senior Directing Staff and DS Tutorial at
the Staff Wing of the Air War College, he is currently a visiting/
Adjunct faculty member at the DSS Department of QAU (since
Fall 2002) and at Defence & Diplomatic Studies Department of
Fatima Jinnah Women University Rawalpindi (since Fall 2006)
where he lectures on arms control, disarmament and strategy.
His current areas of interest are nuclear/ missile issues, missile
defence, chemical- biological control and South Asian security.