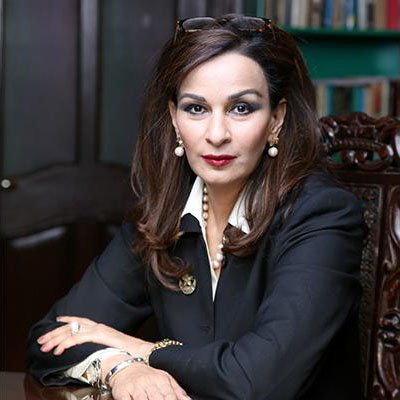 Sherry Rehamn is a Pakistani politician and former diplomat who has been the member of the Senate of Pakistan since 2015. She was the first woman Leader of the Opposition in the Senate from March 2018 to August 2018 and served as the Pakistan’s Ambassador to the United States from 2011 to 2013.

Born in Karachi, Rehman received her B.A from Smith College and her M.A in art history from the University of Sussex. In 1988, she joined the Herald as its editor and remained with the magazine until 1999. In 2002, she was elected to the National Assembly of Pakistan. She was re-elected in 2008, and became a member of the Federal Cabinet under Prime Minister Gillani as the Minister for Information.

She resigned from the cabinet in 2009 and went on to serve as the Chair of the Pakistan Red Crescent and founded the non-partisan think tank, Jinnah Institute. In November 2011, she was appointed as the Ambassador to the United States and remained until April 2013. In 2015, she was elected to the Senate.